(cross posted from my personal blog)

I sent in one of my fairy tale retellings (an adaption of Cinderella) to the Writer’s of The Future Award, one of the best known competitions in the US where hundreds of aspiring authors present their manuscripts every quarter. Naturally I had hoped for the best, but I didn’t count on it, being a non-native speaker/writer. And now this (self-explanatory):

I’m bursting with pride and had to tell you right way. Go on, celebrate with me. Here’s sparkly wine (German naturally, but I’ll have still water please) and chocolate (yummy). 😀

Reflections on an Epic

Kat has me so happy over on my own site I’ve seldom posted here in the past year or so, but today I’m thinking about a major milestone in a chronicling career, celebrated this week. It’s just another book, I suppose. But The Eye of Kog is that most fabulous of monstrous beasts, that legendary chimera so many seek and never find.

Hooked from the Start… Make that Tangled

Think about two tales, two seemingly-separate plot lines. That’s what I thought I had, when I finally decided to chronicle the Lands of Hope back in 2008. As I was drawn into Solemn Judgement’s early days, and looked more closely at how he came to Hope and began to influence the history of the Lands, I figured there would be a novel-length tale about his deeds. Other things were happening, there’s always more. But my dull brain couldn’t see beyond the part that was “Judgement’s tale” at first.

It was just the ending that was killing me.

All’s Well, When it Ends with All

By the time Solemn does his best against the worst, I could no longer ignore the fact that there were these other guys around. A whole party of them, candidly. And even more frustrating, the people Judgement met on his journeys, when he walks a circuit of the northern Kingdoms in the second half of the tale, kept popping up and… well, doing things,  things that were important to understanding the stakes, dare I say the theme of the darn thing. Assuming it all belonged in another book somewhere, I kept trying to juggle some excuse to introduce them in the last few pages. Long entries in the Kingdom Chronicle– ahm, no, even the Children of Hope don’t read that thing before Anteris takes it up. I tried for the minimum– no soap, each element of summary and recap just pulled on threads that extended further and further back, into “Judgement’s tale”, but really not separate from it.

I broke down at last, of course. Two novels, entwined, telling both stories at once (well even that’s a simplification, telling the whole story in order). Without Treaman, Gareth, Linya, Pol and the others, I would never be able to show the story of Solemn Judgement at all. Sleeves rolled up, shoulder to the wheel, nose to the grindstone… just try getting any work done in that position! But then I sat my butt down and started to type. All the threads into one tapestry: and I think the results have been worth it. 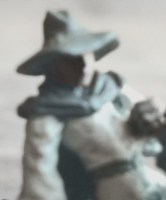 Even today, every time I think to myself “that tale is told” I feel a kind of shock, as if I’ve gone over a hill on a rollercoaster. I re-read the whole thing on the polishes, and again on the edit, and each time I’ve had that wonderful feeling authors get, that strange sense that someone else must have written about your characters. {Oh yeah, that bit where two knights and two squires fight a pair of giants by the salt pool, that was pretty good stuff!} Why did that poor girl in Hollinsfen have to die? You’re telling me she’s a ghost now too? And how ironic, when the Chosen Wanderer is down and wounded, only a grey-clad gate-walker who’s tramped five hundred leagues can get past the knight’s fierce warhorse to help him, because Solemn knows Quester by name.

All here, woven together: the lost city of Oncario, travel through time, the curse of lycanthropy, miracles of restoration in the middle of the chaos-lands, a falling crimson star, warriors who can disappear at will, one king crowned and another going without; and naturally, a desperate race again 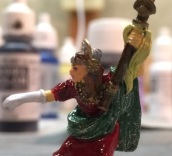 st time and the odds. There’s a lot more than “Judgement’s tale” in The Eye of Kog: Solemn is still there, a bright grey thread that runs through the center. But now he’s in his proper place, sojourning in search of knowledge beyond the world that has not yet adopted him, a drumbeat to the symphony ushering in the Age of Adventure for the Lands of Hope.

With this book, most likely the longest and most complex chain of events that needs to be told about my world is on paper. Hardcover first, for anyone who likes to prop open a fire door after reading. And I dedicated this sequel to you, the readers, because with all my heart I believe that this, reading an epic, is an heroic feat in today’s world. I hope you will attempt it, and believe you will find the effort well rewarded. I know I have.

I admit, it was a little quiet on this blog, but we’ve all been extremely busy behind the scenes. Many of us prepared new releases. Last week, you may have noticed that Debbie announced a Halloween anthology. And today, I’ll show you what I’ve been up to (beside writing nearly 100,000 words and translating them).

The first of my new publications is already available. It is book #7 in the fairy tale retelling series, Treasures Retold (German versions of #1-6 are in the middle of the banner above). “Royal Swans” is an adaption of “The Wild Swans” by Hans Christian Andersen, and I wrote it upon a request from a German blogger. It tells the story of Prince Laurent and his siblings when he angers the princess of the visiting neighboring royal family by rejecting her proposal.

The next release is, naturally, a horror short story. It will be available in time for

Halloween. “Insider” shows us the other side of death as a scientist discovers the truth about the light at the end of the tunnel (Beware, this story is NOT meant to be read by children or sensitive people).

In November, you can become an active participant in a non-linear time travel story. “Troubled Times – Time Troubles” is a branching, interactive short story with several different endings where you can choose the path through the story. It started as an experiment after I had been asked in which time forms and points of view I’d already written. I found that I’d covered most combinations except second person and future tense, so I tried to find out if that could lead to a valid story. My beta readers thought it did, so here it is. An experiment for you. Do you dare? Look out for it by mid-month.

Naturally December is reserved for all things seasonal. Since I’m not overly fond of the commercial push Advent and Christmas get these days, expect something more subtle from me. My short story collection “The Christmas Dragon and other Seasonal Stories” will be available on December 6th,

preceded on December 1st by the eighth fairy tale retelling “The Challenge“, an adaption of “The Cold Heart” by Willhelm Hauff where a charcoal burner wants to improve his lot in live and makes a mess out of it. In my version the two magic entities that complicate the charcoal burner’s live are featured much more strongly.

And right after New Year, I will publish the most complicated story I ever wrote: an interactive non-linear murder mystery novel that tells a complete story. What do I say, it tells several complete stories. There are more than 20 endings for the reader to explore.

As a child I loved “Choose Your Own Adventure” books, but I hated the second person point of view and the lack of a story line with a vengeance. So when I set out to write this novel, I was determined to tell a story of connected events in one of the more traditional points of view (he or I) and settled on 1st person. This/these story/stories were a lot of fun to write but a nightmare to revise. It took me several years to get the novel into a shape where it could go to my editor. But now it’s nearly there, and I hope you’re just as excited as I am.

Maybe one of the books will make a nice gift for you, before, for, or after Christmas. Let me know what you think before I head into NaNoWriMo (a November writing challenge).

Just in time for Halloween, WDM Publishing has released my latest Deb Logan short story collection! MORE GHOSTS AND GHOULIES continues the tradition of spooky fun for younger readers I started with GHOSTS AND GHOULIES. Grab your copy now and be ready for the spookiest night of the year!